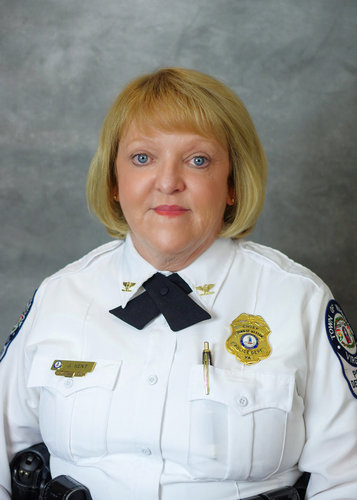 Chief Joan Kent
This email address is being protected from spambots. You need JavaScript enabled to view it.
(804) 333-3737
(Please dial 911 for emergencies)

Warsaw's Chief of Police Joan Norris Kent comes to the Warsaw Police Department with over thirty years of law enforcement experience. She began her career in law enforcement in 1983 with the Lancaster County Sheriff’s Office. She then attended the Rappahannock Regional Criminal Justice Academy and graduated top of her class and received an academic achievement award. Kent went on to become a narcotics investigator and served on the Northern Neck Narcotics Task Force. She became second in command and was promoted to master deputy. She left Lancaster Sheriff’s Office in 1998 and went to work for Kilmarnock Police Department working patrol and criminal investigations. She returned to Lancaster Sheriff’s Office in 2006 to work in the Criminal Investigation Division. She became cross-sworn with many counties in the Northern Neck to allow her to work criminal and narcotic cases with other agencies. Kent and her husband are both residents of the Northern Neck. She looks forward to great things in Warsaw.